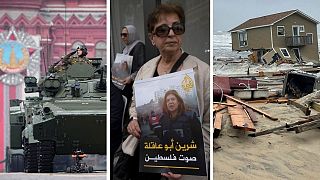 Russia celebrated the 77th anniversary of the Soviet victory over Nazi Germany with a military parade in Moscow on Monday. But this year also, many Russians will be thinking about the thousands of troops in neighbouring Ukraine.

The Russian ambassador to Poland was splattered with a red substance by pro-Ukraine activists in Warsaw on Monday when he tried to lay a wreath to mark Victory Day.

An unoccupied beach house on the North Carolina Outer Banks was filmed collapsing into the ocean on Tuesday, May 10, amid severe coastal flooding.

The journalist for Al Jazeera Shireen Abu Akleh was shot and killed while covering an Israeli raid in the occupied West Bank town of Jenin early Wednesday.

Flash floods swept away one of the main bridges in northern Pakistan, setting off alarms about increased glacial lake outburst floods due to the rise in temperatures in the country.

"Little Amal," the giant puppet, arrived in the Western city of Lviv, Ukraine on Wednesday. The 3.5-meter puppet Amal depicts a 10-year-old girl migrant from Syria, who walked 8,000 km looking for her mother in 2021.