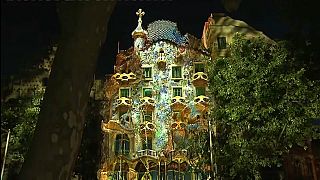 Barcelona: Mapping Show on the facade of Gaudi's Casa Batlló

The famous modernist building Casa Batlló in Barcelona - a masterpiece of Catalan architect Antoni Gaudi - illuminated its unique façade with a video mapping projection on Saturday night May 7th, which attracted more than 47,000 people.

The Turkish-American artist Refik Anadol created from and for this building the multimedia show 'Casa Batlló: Living Architecture'.

The construction of the brilliant architect has served, over the last year, as inspiration for the multimedia author to generate the digital work and has now acted as a canvas to show a part of it

'Casa Batlló: Living Architecture' is also a dynamic NFT - a unique and original digital work - that changes depending on the environmental data of the Passeig de Gràcia, which are collected in real time.

The piece makes Casa Batlló the first Unesco World Heritage building to be digitally reinterpreted in an NFT, and has other special characteristics, such as being the only one of this format to be auctioned at Christie's in New York.