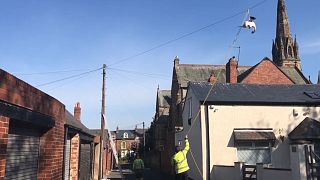 Seagull 'ziplined' to safety after getting hooked on a wire

A gull caught upside-down on a utility wire was rescued in Sunderland, England, on April 30 by a creative fire crew, who used a throw line to pull the bird to a pole and then lift it down to safety, officials said.

According to an RSPCA statement, the gull became suspended upside-down when a fishing hook that had pierced one of its feet got snagged on the wire midflight, leaving the bird hanging by his foot about 9 metres above the ground.

Firefighters latched a throw line to the stricken bird and, using it as a zip line, dragged the bird along the wire toward a pole, where it could be reached by members of the crew.

The bird was examined by veterinarians, who removed the fishing hook, which left behind a minor wound. It was recovering at Pawz for Thought, a local animal rescue charity, but was expected to be released quickly back into the wild, the RSPCA said.