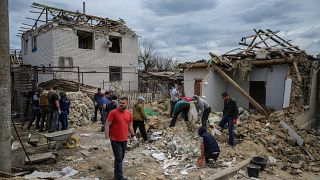 'One for all and all for one': solidarity in Ukrainian town

In the "DD" settlement of Zaporizhzhia, there is no shortage of hands to cleanup the destruction caused by a rocket strike, which left five injured, including one child. People come together in solidarity to rebuild "on the ruins of what Russia has been doing" says one volunteer.

Citizens of Mariupol organised a field kitchen for their neighbours amid the ongoing Russian military operation in Ukraine. Locals could be seen queuing up for soup and eating outside.

Olga, a Mariupol resident, said: "We help the girls, the girls cook. Every day we come, clean, cut (products), we do what is needed." She said the food is then taken to pensioners in her building who aren't able to walk. Olga said they cook dishes such as soup or porridge.

The food, as well as the field kitchen, was provided to them by the military, she said. But they also bring some of the ingredients from their homes.

"We bring what we have," Olga said.