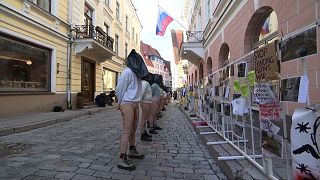 Protest in Tallinn over women allegedly raped during Ukraine war

Demonstrations against alleged Russian aggression in Ukraine continued for the third day in Tallinn on Wednesday.

A few dozen women gathered on Wednesday in front of the Russian embassy building on Pikk tänav to draw attention to Russian soldiers' abuses of women and children in Ukraine.

The message of the protest organizers was this: "Russian soldiers are raping and murdering innocent women and children in Ukraine. People who support this war also support war crimes, jarring murders to which they are accomplices.

That is our message to the supporters of the Putin regime (in Russia, Estonia and everywhere)."