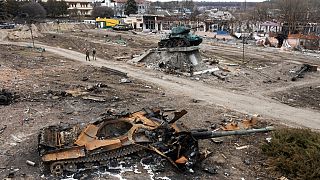 Drone video of damage in Trostyanets and Kharkiv

The fighting in Ukraine looks increasingly like a stalemate on the ground, with the two sides trading control of a town in the east.

Ukrainian forces retook control of Trotsyanest, in the eastern region of Sumy, on Monday as another round of talks aimed at stopping the war is scheduled for Tuesday

Dozens of destroyed Russian army vehicles, including tanks and heavy artillery, were either abandoned behind by the retreating forces or destroyed.