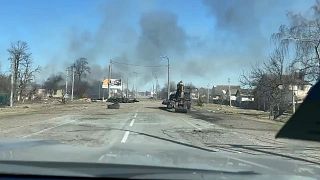 Chernihiv Mayor Vladyslav Atroshenko showed the damage to the besieged city during a drive through the city, one month after the Russian invasion of Ukraine.

MP Oleksiy Goncharenko said he accompanied the mayor and posted this video to his official Telegram channel on March 23. The video shows widespread destruction of civilian infrastructure, including homes and retail buildings.

Atroshenko drove down one of Chernihiv’s major roads, explaining the damage and pointing out that Russian forces were ahead before turning the car around.

Chernihiv is a strategic city in northern Ukraine, north of Kyiv and near the Belarusian and Russian borders.

The city has been attacked multiple times during the Russian military campaign in Ukraine, and on March 23 the bridge linking Chernihiv to Kyiv Oblast over the River Densa was heavily damaged in what Viacheslav Chaus, head of the Chernihiv Regional Civil–Military Administration, said was a Russian strike.

City officials said on March 23 that the supply of potable water was low, and accused Russia of holding the city’s remaining population of 150,000 hostages.