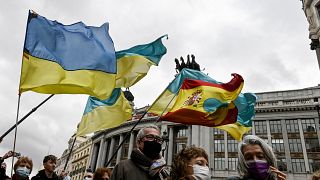 Around 800 people, some waving Ukrainian flags, others with anti-war signs, march in Madrid to protest against the war in Ukraine. The war in Ukraine, which Russian President Vladimir Putin launched on February 24 to stamp out the pro-Western leanings in the ex-Soviet country, has sparked the fastest growing refugee crisis in Europe since World War II, felled Russia-West relations to Cold War-era lows, and is wreaking havoc in the world economy still recovering from the coronavirus pandemic.

In Moscow, images show a heavy police presence near the Kremlin likely deployed to prevent a possible demonstration as Russia's military operation in Ukraine continues.