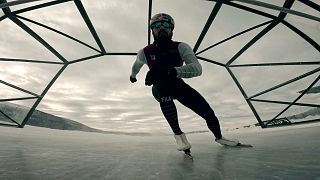 Olympic champion Kjeld Nuis followed up his Beijing heroics with another incredible feat as the Dutch speed skater shattered his own speed world record by 10 km/h after breaking through the 100 km/h barrier with a 103 km/h mark in Tynset, Norway on Thursday.

For the record attempt, a 3km-long natural ice rink on Norway's Savalen Lake was the venue this time around with a Dakar Rally car also employed with a "wind catcher" behind it to crucially keep him out of the wind.

Nuis set a world record four years ago in Sweden with 93 km/h and, this time, a shield was developed in a wind tunnel behind which Nuis could skate to improve his chances with Dutch speed skating legend Erben Wennemars performing a number of tests with it at a deserted airport.