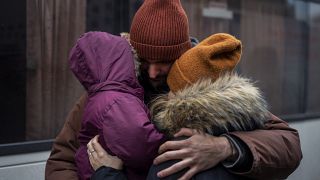 Family separated in Lviv as wife and daughter leave

Some Ukrainian families are being forced to separate to find safety or join together to protect and defend their country from the Russian invasion.

The U.N. refugee agency said on Tuesday that about 660,000 people have fled Ukraine for neighbouring countries since the Russian invasion began.