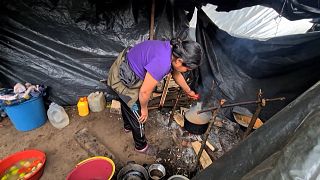 There are about 550 children among the 1,300 or so people camping in the national park, which is located along with one of Bogotá's busiest avenues.

Some of the children are suffering from "malnutrition" and cold.

The majority of the squatters are from the indigenous Embera community, based in the southwestern regions of Cauca and Choco.

They say they have fled violence by armed groups in their home country and cannot return.

After five months of fruitless negotiations, the humanitarian problem has become a "historic crisis" according to the Colombian press.