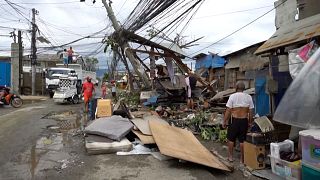 Typhoon Rai blew away Friday night into the South China Sea after rampaging through southern and central island provinces, where more than 300,000 people in its path were evacuated to safety in advance in a pre-emptive move officials say may have saved a lot of lives.

At its strongest, Rai packed sustained winds of 195 kilometers (121 miles) per hour and gusts of up to 270 kph (168 mph), one of the most powerful in recent years to hit the disaster-prone Southeast Asian archipelago, which lies between the Pacific Ocean and the South China Sea.

The typhoon slammed into the country’s southeastern coast Thursday but the extent of casualties and destruction remained unclear two days after with entire provinces still without power and cellphone connection.

The national police reported at least 19 dead but did not provide other details.