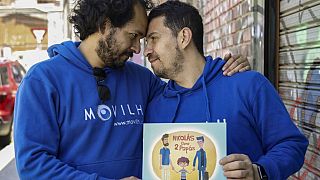 The measure has the support of President Sebastian Pinera, who must sign it into law, and will also enable married same-sex couples to adopt children.

The bill got the green light from the upper house of congress, or senate, Tuesday, and was immediately given the final stamp of approval by the lower Chamber of Deputies with 82 votes to 20.

There were two abstentions.

Chile join only a handful of countries in majority Catholic Latin America where same-sex couples can legally tie the knot -- after Costa Rica, Ecuador, Colombia, Brazil, Uruguay and Argentina and in 14 of Mexico's 32 states.

Chile legalized same-sex civil unions in 2015, and has been eagerly awaiting the legalization of gay marriage since then-president Michelle Bachelet sent a bill to Congress in 2017.

In a surprise move, her conservative successor, Pinera, announced in June he would seek the urgent passage of the bill -- which has the backing of a majority of Chileans -- through Congress.