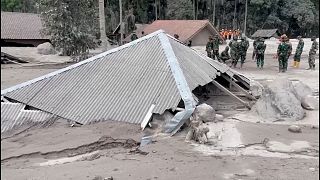 The death toll following the eruption of the highest volcano on Indonesia's most densely populated island of Java has risen to 13, with seven people still missing, officials said Sunday as smoldering debris and thick mud hampered search efforts.

Mount Semeru in Lumajang district in East Java province spewed thick columns of ash more than 12,000 meters (40,000 feet) into the sky, and searing gas and lava flowed down its slopes after a sudden eruption Saturday triggered by heavy rains.

The debris and lava mixed with rainfall formed thick mud that destroyed the main bridge connecting Lumajang and the neighboring district of Malang, as well as a smaller bridge.

Transportation Ministry spokesperson Adita Irawati said her office issued a notice Saturday for all airlines to avoid routes near the volcano.

She said flight operations are still running as scheduled and that authorities will continue to monitor the situation.

The Darwin Volcanic Ash Advisory Centre said the spread of volcanic ash from Mount Semeru was detected to the southwest moving at a speed of 50 knots.

The last time Semeru erupted, in January, there were no casualties.

Indonesia, an archipelago of more than 270 million people, is prone to earthquakes and volcanic activity because it sits along the Pacific "Ring of Fire," a horseshoe-shaped series of fault lines.