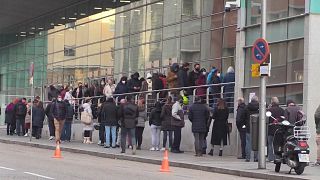 People queued for COVID-19 vaccines in the Spanish capital on Wednesday, as authorities stepped up efforts to vaccinate the small proportion of the population that still hasn't been jabbed.

Esteban Mariño only chose to get the shot after planning a winter break to Portugal, where authorities have been tightening rules on unvaccinated visitors.

Others, too, said they were getting inoculated as jabs becamme compulsory in more and more places.

A recent survey by Spain's polling institute, CIS, showed that about a third of the 1.6 million adults who remain unvaccinated in Spain were still planning to get their shots.

But nearly 3% of those polled - the equivalent of one million people if the figure was extrapolated to the country's total population - were planning to avoid it. Mandatory COVID-19 passes have remained controversial in Spain.