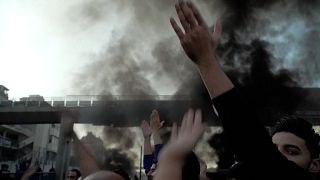 Scores of protesters closed major roads in different parts of Lebanon on Monday to express anger against the country's political class amid a worsening economic crisis and harsh living conditions.

The road closures with burning tires were seen mainly in the capital Beirut, the northern city of Tripoli, the southern port city of Sidon and the eastern Bekaa valley.

Lebanon's economic crisis deteriorated in recent weeks with the Lebanese pound hitting new lows of 25,800 to the U.S. dollar, eradicating purchase power of most the country's residents who get paid in pounds.

The government ended subsidies to fuel products this summer leaving many unable to afford transportation fees.

Earlier this month, the health ministry reduced subsidies to some medicines putting the lives of poor people in danger amid a surge in medicine prices.

Deep divisions over the judge leading the investigation into last year's massive port blast at Beirut's port have stalled the work of the government that has not met since Oct. 12.

Lebanon's economic meltdown that began in late 2019 has left more than three quarters of the country's 6 million people, including a million Syrian refugees, live in poverty.

The crisis has been described as one of the worst the world has witnessed since the 1850s.