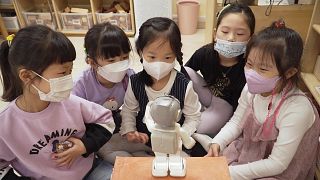 Seoul has started trialling pint-sized robots as teaching aids in kindergartens - a pilot project the city government said would help prepare the next generation for a hi-tech future.

The "Alpha Mini" is just 24.5 centimetres tall and can dance, lead sing-a-longs, recite stories and even teach kung-fu moves as children mimic its push-ups and one-legged balances.

The robot's eyes wink and blink -- and its pupils become heart-shaped during conversation. With a camera on its helmet, it takes photos that are instantly sent to a tablet for viewing.

The robots are being trialled in 300 Seoul nurseries and childcare centres, with the government recommending the programme for children aged three to five.