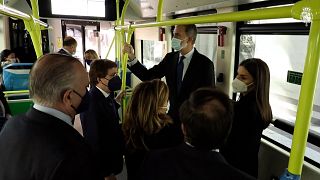 Spain’s King Felipe VI and Queen Letizia took a public bus in Madrid on Monday, in an usual event to commemorate the 75th anniversary of the city’s public urban transport company, 'EMT'.

Felipe VI and Queen Letizia have boarded one of the buses on line 001, which is one hundred percent electric, on the corner of Calle Alcalá and Gran Vía to the surprise of the passengers inside.

Accompanied by the mayor of Madrid, José Luis Martínez-Almeida, and other authorities, the royals made the journey aboard the bus to the Atocha roundabout, the last stop on the line.

During the tour, the monarch confessed that it was the first time he got on a city bus, while QueenLetizia recalled that she used it a lot when she was studying in Madrid, first to go to high school and, later, to go to university.

"When people entered, they were very surprised by the presence of the royals, but immediately they began to talk with them and take pictures," Martínez-Almeida told journalists, who has doubled his position to also act as photographer.

The royals have been interested in the plans of the EMT and the renewal of its fleet, which aims to stop having diesel powered vehicles as of 2023 and will be fully electric powered as of 2027.