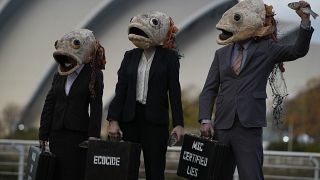 Dressed in pinstripe suits to represent delegates attending the COP26 conference, and wearing giant makeshift fish heads, the activists gathered on the banks of the River Clyde.

They carried briefcases carrying messages including "ecocide" and "war on fish," and threw plastic fish to the ground.

"What we want is a ban to bottom trawling, a stop to industrial fishing," said Laura Baldwin, an activist and British Olympic sailor.

Recognising that this would result in job losses, Baldwin called on world leaders to implement a "fair transition" which would give workers the chance to retrain.