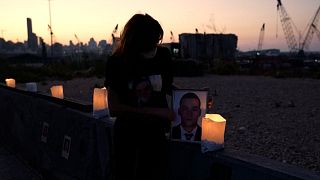 Families of victims killed in the deadly Beirut blast mark 15 months since the explosion, protesting continued political interference in the probe into the disaster.

The Lebanese judge leading investigations into last year's Beirut port blast was forced to stop work over a lawsuit filed by an ex-minister he had summoned for interrogation.

Tarek Bitar was informed of a "lawsuit submitted by former public works minister Youssef Fenianos... which forced him to pause the probe until a ruling is issued", a court official told AFP on condition of anonymity.

It is the third time that Bitar has had to suspend his probe in the face of lawsuits filed by former ministers suspected of negligence over the August 2020 explosion.

The total number of lawsuits filed against Bitar now stands at 15, according to judicial sources.

The latest comes amid a campaign led by the powerful Shiite movement Hezbollah demanding Bitar's replacement over allegations of "bias" that have been widely dismissed by rights groups and families of blast victims.

The Shiite group's representatives in government have said they will boycott cabinet meetings until it takes a clear stand on demands to replace Bitar.

The cabinet, as a result, has failed to hold a single session in three weeks.

Prime Minister Najib Mikati condemned attempts to force his government to intervene in judicial affairs, in a thinly veiled criticism of Hezbollah.

Human rights groups and victims' relatives fear the repeated suspensions are a prelude to Bitar's removal, which would further derail the official inquiry into Lebanon's worst peace-time tragedy.

Bitar's predecessor, Fadi Sawan, was forced to suspend his probe for the same reason before he was finally removed in February, in a move widely condemned as political interference.