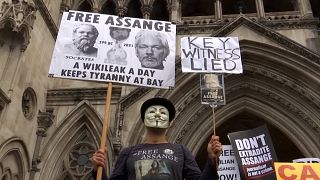 Scores of supporters of WikiLeaks founder Julian Assange gathered in front of Britain's High Court on Wednesday ahead of an appeals trial that is expected to see the U.S. government ask to overturn a judge's decision that stopped Assange's extradition to the United States to face espionage charges.

In January, a lower court judge refused an American request to extradite Assange on spying charges over WikiLeaks' publication of secret military documents a decade ago.

But she rejected defence arguments that Assange faces a politically motivated American prosecution that would override free-speech protections, and she said the U.S. judicial system would give him a fair trial.

Lawyers for U.S. authorities have been granted permission to appeal.

At an earlier hearing they questioned the psychiatric evidence in the case and argued that Assange does not meet the threshold of being "so ill" that he cannot resist harming himself.

Assange, who is being held at London's high-security Belmarsh Prison, had been expected to attend by video link, but he was not present as the hearing began.

Assange's partner, Stella Moris, expressed her concerns about his health outside the court.