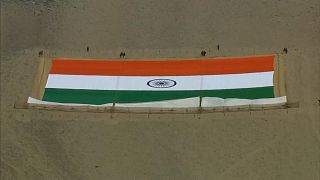 The world's largest 'Khadi national flag' was installed in Leh on Saturday and it has a length of 68.6 meters with a width of 45.7 and weighs 1000 kilos. The unveiling of the flag took place on a day when the country is observing the birth anniversary of the “Father of the Nation,” Mahatma Gandhi, with whom Khadi is synonymous.

Lieutenant Governor of Ladakh, RK Mathur pushes the button to unveil the flag; A flypast by helicopters of the Indian Air Force was also organised on the occasion.