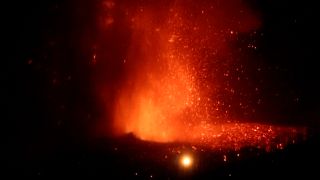 A small Spanish island in the Atlantic Ocean is struggling days after a volcano erupted, forcing the evacuation of thousands of people, and authorities are warning that more dangers from the explosion lie ahead.

The eruption occurred Sunday afternoon on La Palma, one of eight volcanic islands in Spain's Canary Islands archipelago, which is strung along Africa's northwestern coast. It was the second volcanic eruption in 50 years for the island, which has a population of 85,000.

A 4.2-magnitude quake was recorded before the eruption.

Huge plumes of black-and-white smoke shot out from the Cumbre Vieja volcanic ridge after a week of thousands of small earthquakes.

Unstoppable rivers of molten lava, some up to 6 meters (20 feet) high, are now flowing downhill toward the ocean, engulfing everything in their path.