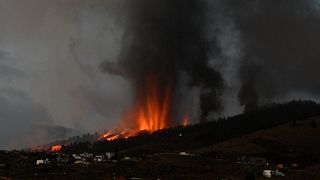 A volcano on Spain’s Atlantic Ocean island of La Palma erupted Sunday after a weeklong buildup of seismic activity, prompting authorities to speed up evacuations for 1,000 people as lava flows crept toward isolated homes on the mountain.

Video from the National Geographic Institute of Spain showed dramatic images of huge red streams of lava shooting out along the Cumbre Vieja volcanic ridge.

Mariano Hernández, the president of La Palma island, told Canary Islands Television there were no immediate reports of injuries or deaths from the eruption. He said there were five eruption points, of which two were spewing magma.

One black lava flow with a burning tip was sliding toward houses in the village of El Paso.

Mayor Sergio Rodríguez said 300 people in immediate danger had been evacuated and sent to the El Paso soccer field. Roads were closed due to the explosion and authorities urged the curious not to approach the area.

La Palma, with a population of 85,000, is one of eight islands in Spain's Canary Islands archipelago off Africa's western coast.