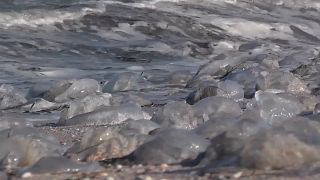 Thousands of jellyfish have flooded the northern shores of Crimea at a time when Russian tourists usually flock to the peninsula's warm shores for the last weeks of summer.

Locals and tourists say the jellyfish have made it impossible to go swim in the water due to the "jellyfish soup" that leads to lengthy burns.

The epicenter of the jellyfish invasion has been the Azov sea coast of Crimea.

While jellyfish on Crimean shores are not uncommon in August, their numbers have increased in recent years - largely because of increasing salinity in the Azov sea.

Ukraine cut off the water supply to the North Crimean Canal after the peninsula was annexed by Russia in 2014.

Because of the jellyfish, Crimea's usually crowded northern shores are deserted of all but the bravest swimmers and kite surfers.