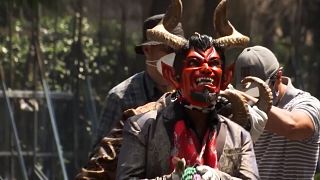 Hundreds of Indigenous people dressed in traditional clothing marched down Paseo de la Reforma, one of Mexico City's main avenues, to the National Palace to demand inclusiveness from the government of President Andrés Manuel López Obrador.

With more than 23 million people who consider themselves Indigenous out a population of 126 million, Mexico is one of the countries with the largest Indigenous population in the Americas.

Although President López Obrador has promised to prioritize this segment of the population comprised of 68 different peoples, the demonstrators asked for more than just token gestures.

The demonstration took place the same week in which the country commemorates 500 years of the conquest by the Spaniards, an event the government has renamed as the commemoration of 500 years of Indigenous resistance.