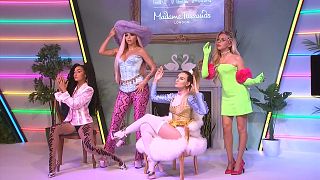 Fans of top British girl group Little Mix have been asking to see their heroes rendered in wax for years - and now, to tie in with the band's 10th anniversary - their likenesses have gone on display at Madame Tussauds in London.

Based on measurements of the pop stars, statues of Leigh-Anne Pinnock, Jesy Nelson, Perrie Edwards and Jade Thirwall were unveiled at the world famous tourist attraction, Wednesday (28 JULU 2021).

The look recreated is from their "Bounce Back" music video from 2019 and sees the singers wearing the same outfits from the promo.

Nelson left the group in December 2020 to focus on her mental health but Tussauds shows the original line-up. The statues have been in progress since early 2020.

Little Mix is currently on hiatus as both Pinnock and Edwards are pregnant.