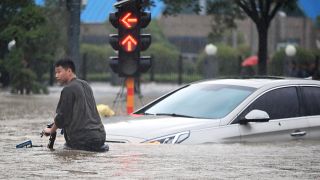 Twelve people died after torrential rains flooded a subway in the central Chinese city of Zhengzhou, as shocking images showed passengers struggling against chest-high water inside a train carriage.

Around 200,000 city residents were evacuated, local government officials said, with soldiers leading rescue efforts in the city of over 10 million people, where days of rain have inundated the streets and subway.

Rainstorms submerged Zhengzhou's metro, killing 12 people and injuring five, while hundreds were rescued from the subway, city officials said in a Weibo post.

Others showed dramatic rescues of pedestrians in Zhengzhou from torrents gushing through the streets.