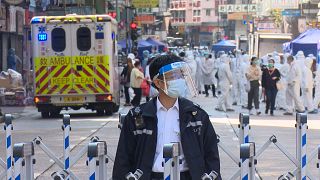 Hong Kong has imposed its first lockdown of the coronavirus pandemic, telling residents in the affected area that it will remain in place until they are all tested.

Around 10,000 people live in the Yau Tsim Mong district, which is expected to remain under strict measures for the next 48 hours. More than 3,000 personnel have been deployed by authorities to carry out the testing operation.

The district, which is a working class neighbourhood with old buildings and subdivided flats, accounted for around half of Hong Kong's new COVID-19 infections in the past week.

Recent sewage testing in Yau Tsim Mong picked up more concentrated traces of the COVID-19 virus, prompting concerns that poorly-built plumbing systems and a lack of ventilation in the subdivided units may present a potential route for the virus to spread.

Hong Kong has previously avoided imposing lockdowns, with leader Carrie Lam saying in July that authorities would avoid taking such "extreme measures" unless there was no other choice.

The restrictions, which were announced at 4am local time, are expected to end within 48 hours, the government said.

Hong Kong has seen a total of 9,929 infections in the city, with 168 deaths recorded as of Friday.