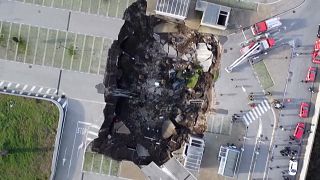 These pictures show the devastation after a giant sinkhole opened up in the southern Italian city of Naples on Friday.

It happened in the parking area of a hospital, swallowing cars, road signs and trees.

The 2,000-square-metre sinkhole caused the closure of a nearby residence for COVID-19 patients because it severed its water and electricity supplies.

“Frankly, we were also worried about the collapse of all utilities and that the activity of the hospital could be jeopardised," said regional governor Vincenzo De Luca. “Thank God, this did not happen. We had a power break, but electricity was restored and now we don’t have any problem in providing care."

The sinkhole, which was 20 metres deep and opened up at dawn, could have been caused by recent heavy rainfall, according to firefighters.