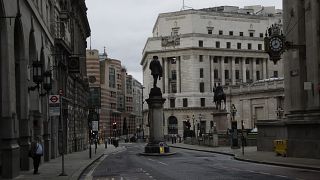 Streets in London and Edinburgh were empty on Tuesday after England and Scotland announced respective COVID lockdowns.

Scotland's came into effect at midnight on Monday, while England's is set to follow 24 hours later.

The fresh lockdowns are aimed at stemming a steep rise in virus cases, driven by a new variant of the disease.

Britain has approved vaccine shots from two different manufacturers so far - one from Pfizer-BioNTech and the other from Oxford University and AstraZeneca.

The government hopes to give a first dose of vaccine to everyone in its top four priority groups, or 13 million people, by the middle of February.

The number of confirmed new daily infections in the UK in the past seven days jumped 50% from the previous week, and the coronavirus death rate rose 21% in the same period.