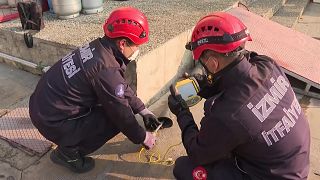 Cat rescued from inside electric cable casing by Turkish firefighters

A cat trapped inside the casing of an electrical cable has been rescued by Turkish firefighters.

First responders in the Aegean province of Izmir arrived at the scene Wednesday following reports of "noises" coming from underground.

The firefighters first determined the location of the feline with thermal cameras and pried open a hole from which the animal was able to squeeze out.

The cat was reported to be in good health following the rescue.