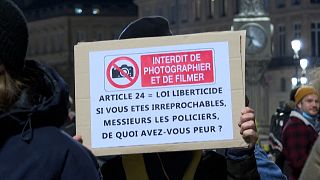 Protesters gathered in the French city of Bordeaux to show their opposition to a new security bill.

The legislation would make it illegal to share images of police officers for "malicious purposes".

Media unions say it could allow police to prevent journalists from doing their work and potentially documenting abuses.

It was given the green light by French MPs on Tuesday.

The bill is expected to go before the country's upper house in January, and must also receive a referral from the country's constitutional council before it comes into effect.