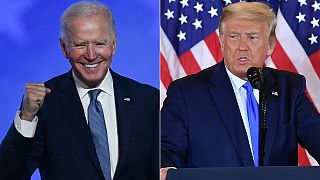 Contrasting speeches from candidates as vote looks too close to call

Democratic presidential nominee Joe Biden says he is confident he will win the US presidential election, but is cautioning his supporters to wait until every vote is counted.

"We knew this was going to go long," he told an outdoor rally in Wilmington, Delaware.

"We're going to have to be patient until the hard work of tallying the votes is finished and it ain't over till every ballot is counted," Biden said, adding "But we're feeling good."

President Donald Trump is vowing to ask the Supreme Court to weigh in on the inconclusive election. The Associated Press has not currently declared a winner in the presidential race.

Trump appeared before supporters at the White House and cried foul over the election results, calling the process “a major fraud on our nation.” But there’s no evidence of foul play.

The night ended with hundreds of thousands of votes still to be counted, and the outcome still unclear in key states.