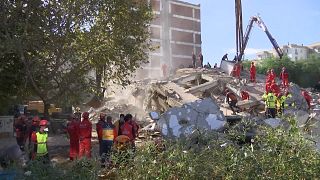 Rescue workers extricated a body from a collapsed building in western Turkey on Sunday after a strong earthquake in the Aegean Sea struck.

The earthquake on Friday hit northeast of the Greek island of Samos.

Turkish media reported that one of the buildings had been at risk of earthquake damage but continued to be occupied.