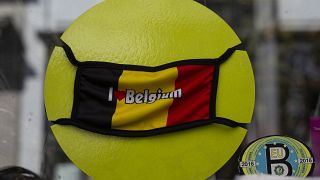 People in Brussels will have to start wearing face masks in public from Wednesday, regional authorities announced in an effort to curb the spread of coronavirus.

The measure was extended in 19 municipalities in the region after the threshold of 50 daily cases per 100,000 people was crossed, the regional government said in a statement.

Masks have been required indoors since July for those over the age of 12.

Belgium has one of the highest per-capita death rates due to COVID-19 in the world.

Once again, infections are rising after earlier success in bringing the epidemic under control.

A Belgian Crisis Centre spokeswoman Frederique Jacobs said the capital region had seen an "alarming" 57 per cent rise in infections over the previous week.

The measure does not apply to Belgium's two other regions, Dutch-speaking Flanders and French-speaking Wallonia.

However, there were some exceptions to the ruling in Brussels, such as when playing sports or for people with certain disabilities.