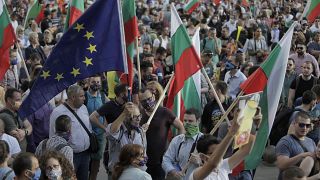 This was the scene in the Bulgarian capital Sofia as anti-government protesters tried to break into the country's parliament.

Two policemen and one demonstrator were injured on Tuesday in what was the seventh consecutive day of unrest.