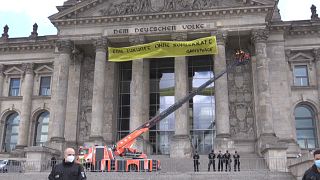 German MPs have passed legislation that envisages shutting down the country's last coal-fired power plant by 2038.

But environmental protesters are angry at what they see as a drawn-out timetable for Germany's energy transition.

Germany is already phasing out nuclear power and the government envisions greater reliance on renewable energy as well as hydrogen and natural gas in the future.