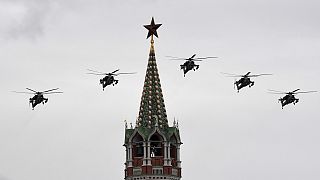 Russia on Saturday marked Victory Day with a flypast over Moscow, in a ceremony shorn of its usual military parade and pomp by the coronavirus pandemic.

Victory Day, marking the defeat of Nazi Germany, is Russia's most important secular holiday and this year's observance was expected to be especially large as it is the 75th anniversary.

However, the Red Square military parade and a mass procession, known as The Immortal Regiment, were postponed due to measures to stifle the spread of the new virus.

The only vestige of the conventional show of military might was a flypast over central Moscow including 75 warplanes and helicopters.

Russian President Vladimir Putin laid flowers on Saturday at the Tomb of the Unknown Soldier in Moscow to mark the victory over Nazi Germany in World War II.

During his address to the nation, Putin said that Victory Day remains the most valuable and precious holiday in Russia.