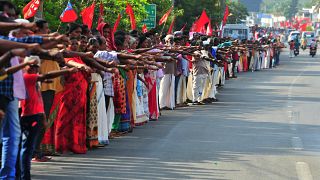 Up to seven million people lined the streets of Kerala in southern India to form a 620-kilometre human chain, organisers said, in protest over a new citizenship law that critics say is unconstitutional and discriminatory toward Muslims.

This human chain across the southern-Indian state was organized by the Left Democratic Front (LDF) to protest against the Indian government's Citizenship Amendment Act (CAA).