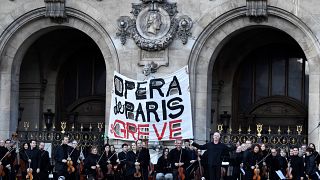 Musicians, singers and other members of the Paris Opera gave a free concert in the French capital on Saturday.

It was part of nationwide strikes that have been underway since December against a proposed retirement reform.

The reform would overhaul France's pension system, scrapping 42 special regimes in favour of a universal system where workers accrue points during their careers.

This was the fourth open-air concert performed by the opera in recent weeks. Musicians were cheered on by colleagues, including ballerinas who last month performed scenes from Swan Lake in the same spot as part of a similar protest.

Performances by the Paris Opera have recently been cancelled due to the strike.