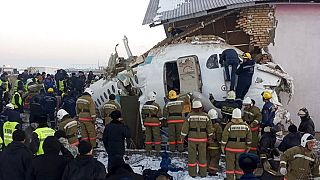 A plane with 98 people aboard crashed shortly after take-off early on Friday in Kazakhstan, killing at least 12 people, Kazakh officials said.

There were 54 people hospitalised with injuries, at least 10 of them in critical condition.

The cause of the crash in the Central Asian nation was unclear, but authorities were looking at whether pilot error or technical failure were factors, Kazakhstan's deputy prime minister Roman Sklyar said.

The Bek Air aircraft hit a concrete fence and a two-story building after takeoff from Almaty, Kazakhstan's largest city and former capital.

It lost attitude at 7:22 am local time (2.22 CET), the Almaty International Airport said.

Sklyar said the plane's tail hit the runway twice during take-off, indicating that it struggled to get airborne.