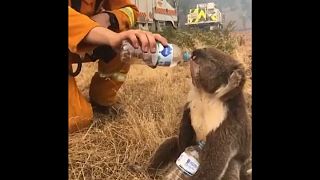 Watch: Thirsty koala gets a drink of water as wildfires rage

A firefighter helped a thirsty koala drink water from a bottle on Sunday in South Australia while fires raged across the region.

The video was captured in the appropriately-named Cudlee Creek, about 40 kilometers (25 miles) northeast of Adelaide.

The annual Australian fire season, which peaks during summer, started early after an unusually warm and dry winter.

More than three million hectares (7.4 million acres) of land has burned nationwide during a torrid past few months. Nine people have been killed and more than 900 homes destroyed.

Around 200 wildfires were burning in four states, with New South Wales accounting for more than half of them, including 60 fires not contained.

Almost 800 homes have burned in New South Wales, which last week was paralyzed by a seven-day state of emergency.