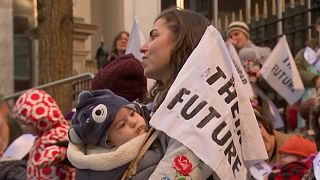 Members of climate protest group Extinction Rebellion gathered outside the headquarters of the Conservative Party in London on Monday (December 2) with their babies, demanding that politicians do more to tackle the climate crisis.

The demonstrators called for politicians to take action on climate change in order to preserve "basic human needs" for their children.

British voters are set to head to the polls next week and the issue of climate change is a key topic of debate between the major political parties, as well as being high on voters' priorities.

Extinction Rebellion launched in London a year ago, inspiring waves of colourful, disruptive actions around the world, calling for rapid cuts in carbon emissions and the repair of collapsing ecosystems. Thousands of people have been arrested during protests.