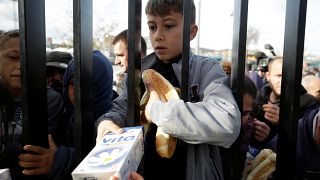 Residents in the Albanian city of Durres on November 29 crowded outside a school converted into an emergency relief centre to receive food, three days after a deadly 6.4-magnitude earthquake rocked the port city and surrounding areas.

The death toll from the quake, Albania's worst ever, has reached 49. There have been more than 500 aftershocks since Tuesday's quake, some with a magnitude of more than 5.0, rocking already damaged buildings and terrifying residents.

Locals said they were lacking items such as blankets and some were struggling to receive aid at all.

Albanian Prime Minister Edi Rama said 25 people had died in Durres, 23 in the northern town of Thumane and one in the town of Lac. The quake damaged more than 700 houses in Durres, destroyed 12 more and left nearly 200 apartment buildings with cracks and fissures, he said.

Rama extended a 30-day state of emergency already in force in Durres and Thumane to Lac.