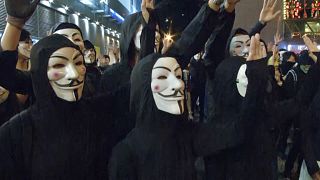 Demonstrators wearing Guy Fawkes masks, a worldwide symbol of protest, marched in downtown Hong Kong on Tuesday to mark the one-month anniversary of the mask ban.

Police were not seen, even though the protesters were violating the ban on the use of facial coverings at rallies.

Protests in recent weeks have been marked by violence as hardcore anti-government demonstrators set fires and trashed facilities in clashes with police who used tear gas, and brawls occurred between demonstrators and pro-Chinese activists.

On Monday night, Chinese President Xi Jinping met with Hong Kong leader Carrie Lam on the sidelines of a trade event in Shanghai.

Lam said Xi showed support to the Hong Kong government's action in dealing with the recent unrest in the semi-autonomous city.