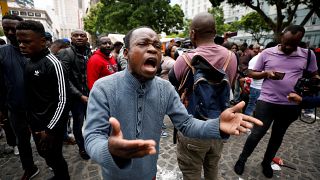 Refugees and police clash at Cape Town protest against xenophobia

Around 100 people were arrested on October 30 as part of an operation to disperse a group of refugees and asylum seekers who had staged a prolonged sit-in near the United Nations refugee agency in Cape Town, South African police said.

Local media showed footage of police firing water cannon into the crowd of protesters and arresting some of them. The South African Police Service (SAPS) said in a statement that they evicted around 300 people from the area in accordance with a court order.

The refugees and asylum seekers have been camping outside the offices of the UN High Commissioner for Refugees for weeks, asking to be moved out of South Africa, where they say they do not feel safe after a wave of xenophobic violence.

The refugees want to be repatriated to their home countries or moved elsewhere after a spate of deadly riots and attacks in September, which killed at least 10 people and left many foreigners afraid to live in the country.