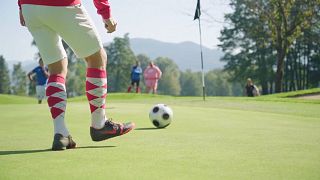 The world's best Footgolf players took part in the Diamonds Cup in September.

The competition lasted three days from 19th-22nd September 2019, on a challengeing course in Salzburg, consisting of 18 holes.

Footgolf is one of the fastest growing sports worldwide and is a combination of football and golf - it is played on a golf course.

The best players around the world, through the official world ranking 2019, could qualify for this event.

The winner of the Men's championship was Vincent Huber from Switzerland whilst Rebeka Rezna and Gyorgy Podusil won the women's and senior categories respectively.