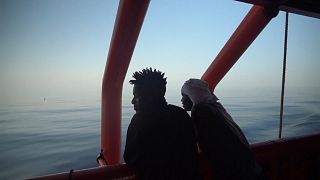 Migrants aboard a charity rescue ship celebrated after receiving permission on Saturday to sail to the Italian island of Lampedusa.

The Norwegian-flagged ship is operated by humanitarian groups Doctors Without Borders and SOS Mediterranee.

The vessel was carrying 82 migrants on board that were rescued in early September.

The humanitarian groups said they were relieved by the news that the Italian authorities would allow the vessel to disembark. The vessel had appealed for days to be allowed into a port safely.

Last month charity ship Open Arms spent nearly three weeks at sea before disembarking at Lampedusa. The captain said that the conditions on the ship were deteriorating.

Italian Prime Minister Giuseppe Conte recently formed a new coalition with centre-left Democrats who would like a more humane policy on charity ships.

Matteo Salvini's far-right La Liga party, which was part of a previous coalition with the Five Star Movement, had prevented rescue ships from entering Italian waters.