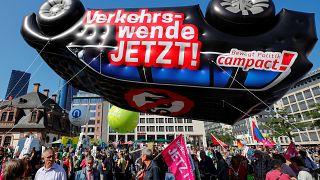 Despite car manufacturers showcasing their climate credentials with new electric cars, the climate protesters are criticising their lack of real climate protection and demanding a proper change in transportation habits.

The leader of the Green Party parliamentary group in the Bundestag, Anton Hofreiter, who was also taking part in the protest, criticised electric cars in particular for not being powered by a sustainable power source.